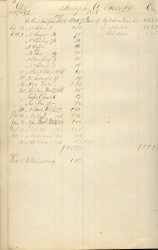 Sometime after many debits, credits, and payments in trade and cash for dry goods and groceries were recorded in an 1857 ledger book, one of the early residents of Georgetown Township in Ottowa County, Michigan, made thrifty use of it in pursuit of her literary ambitions.*Beautiful ink script chronicling purchases of shoes, flour, candy, and Castile soap shares space with the first penciled chapters of a novel entitled Too Homely to Live. 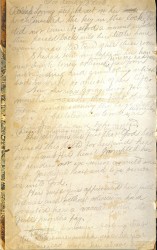 Rachel Loring, the (presumed) protagonist, is employed as a stenographer and “type-writer” at a large department store — that must have been a real step up from the Georgetown Township general store. Because the now-obsolete typewriter did not become commercially available until the 1870s, the author must have begun writing sometime after that.Was she also the author of the original entries? Was she a daughter, sister, wife, or widow? Did she dream of working, like her character, in the big city? (In this case, probably Grand Rapids.) The handwriting is not dissimilar, but back then, good penmanship was something everyone could strive for.

*Considered in its historical context, the style and subject matter suggest to me that the author is a woman.

One thought on “Too Homely to Live”